*** UPDATED 5G VERSION THESE NOW HAVE THE SOLFEGGIO 741HZ TENSOR RINGS 1/8 AND 1/4 WITHIN THE DOME , THIS DEVICE ALSO INCLUDES 1 X TENSOR GENERATOR 1/8 741HZ *** **** THESE CAN NO LONGER BE PLACED ON DIRECTLY ELECTRICAL DEVICES WITH MEMORY CARDS OR HARD DRIVES AS THEY MAY WIPE THE MEMORY CARDS INSIDE DUE TO NEW INGREDIENTS TO COMBAT 5G, PLEASE PLACE NO LESS THAN 5CM AWAY FROM ANYTHING WITH A HARD DRIVE OR MEMORY CARD.  ****
Category: Orgonite

Cleans the cell from the toxins. Frequent use of 741 Hz leads to a healthier, simpler life, and also to change in diet towards foods which are not poisoned by various kinds of toxins. It also cleans the cell from different kinds of electromagnetic radiations. Another important application of this sound frequency is cleansing infections – viral, bacterial, and fungal. This tone leads you to pure, stable and spiritual life.

Photon Orgone’s devices are made in a very specific way, I have been developing and researching Orgonites and Orgone Energy for nearly 15 years. I have found that only specific combinations of metals and crystals will work in creating positive energy.

The modern world we live in has many dangers; cell phones are just one of them. They are a major energy drain and even harm the brain with their radiation bombardment. This pyramid prevents that by using Black Tourmaline and Kyanite to block the radiation while Topaz, Labradorite, Quartz and Selenite clear the mind and balance energy. Now the Danburite and Mookaite both physically and emotionally heal the damage caused.

This Photon Orgone Pyramid may reduce the effects from the following:

I decided to make this Pyramid to combat all of these atrocities they are bringing upon us I have combined the following crystals together because of their healing capabilities towards radiation and our immune system they are: Black Tourmaline, Kyanite, 5 x Clear Quartz Points, Selenite, Danburite, Labradorite, Topaz, Mookaite, Lapis Lazuli, and Sodalite.

After researching and using a Kirlian camera the aura was noticeably brighter and larger if within a 3 metre radius of this device over a period of two months for over 5 hours a day. Our test subjects Chakras have also become more balanced and attuned for the user of the Photon Orgone Pyramid and many people have noticed an increase in their sixth sense by making better business or personal decisions. 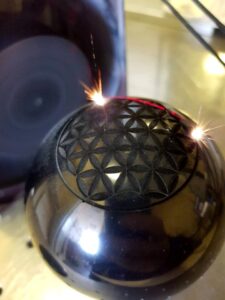 We can now offer laser engraving on some shungite products.  For more information e-mail us at lovetechnologies@hotmail.com